So needless to say that is has been quite some time since my last post. A lot has happened over the past few months, which I will explain. Regardless a series of events have brought me back to myself and I was able to sit down and finally pick up a paint brush again. It’s always strange to me how easily you can stray from something that brings you such joy and how hard it can be to jump back on board.

It began back in October, when Lee and I moved to a town that was much more central for our lives. Lee’s commute had been over 2 hours on a normal commuting day and since he is the bread-winner, it was important for him to not spend 4 hours in the car each day. That much time can make a person go crazy, but most of all we never got to see each other. Once we moved, my commute doubled and although I loved the company I was working for, it was never meant to be my career. Eventually, I fell into a wonderful job, that although has nothing to do with my major or who I am as a person, is a wonderful company. Shout out to Suffolk Construction, Risk Management represent! HA ridiculous. All of this was happening over those crazy holiday months when nothing seems normal and no one has anytime.

My artwork fell to the back burner and although I kept trying to rekindle the flame nothing seemed to work. Once I took the position at Suffolk, my days became normal but I was settling. Lets just say settling took me a while. I was kind of trying to find myself again, a fresh new start. It always seems to come around the same time of the year, not January like everyone would imagine, normally late February into March. First it was getting the job under my belt, then I started focusing on my health, which has recently turned to Crossfit. Its only been 2 weeks, but I love it already! And finally, my artwork comes into play.

The last few weeks were weird, I felt odd but could not quite pin point it. Then the other day out of the blue I just picked up a pen and started to draw an image I had been thinking about. Now its nothing special, more of a face then anything, but it seemed important. 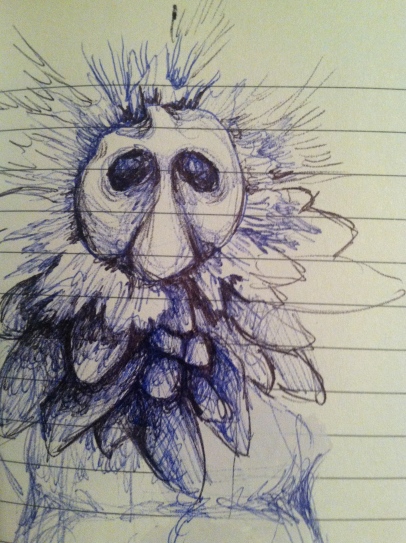 Now as you can see, it’s a doodle, it’s also Day Two Hundred and Nineteen. It felt good to make something, but I couldn’t stop here. Oddly enough it took me another few days to think to paint it and even trying to start  that seemed like a battle. My artist “nook” was covered in stuff, its like a drop place for anything I ‘ll “get to later.” Regardless, I came home from work one night and for no reason I was mad as hell. I started cleaning, cleaning was a good start. Then I tried to make the atmosphere relaxing, I know its cheesy but I lit a few candles and put on some classical music. It seemed to work because before I knew I was setting up the table, filling up the water jug and taping down the paper.

Then I began. I knew I was thinking about the above image but I didn’t really plan it on the page. I love the end result though. I thought initially that I only loved it because it was the first thing I had done in over 2 months but really I think it might actually be somewhat interesting.

The above is the complete image, also known now as Day Two Hundred Twenty. As always, I have included a cropped version to see more details although I didn’t really make too many small intricacies to draw you in. What I love that happened unintentionally is the overlay of colors. Originally, I thought that I enjoyed the lower section better, but the more “feathery” looking section has grown on me.

In the end, I think this may be the start to another good run. I know I to some degree failed at my initial goal of 365 images in the year, but I’m trying to think of this in a new light. I am an artist, I am creative but I am a real life girl and unfortunately I cannot be an artist full-time and make ends meet quite yet. That’s not to say that that day will never come because it will, I’m just hoping it happens before I retire!

The new goal is to complete the challenge. I’m not giving myself a deadline, but the sooner I complete it the better. This is a rather broad adjustment but hopefully that means that without restraints I may be able to complete this thing stress free.

Enjoy and I’ll see you next time.